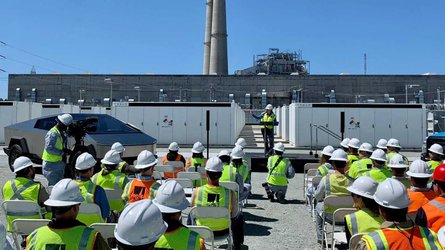 In the wee hours of the California morning, at about 1:30 AM, a Tesla Megapack industrial battery pack caught fire at Tesla’s Elkhorn Battery Storage Facility in Monterey County, CA. Firefighters and workers from PG&E who were tackling the blaze at Moss Landing facility were still trying to extinguish the fire when reports were coming out just prior to 9:30 AM Pacific Time.

At this point, it has become increasingly clear that the fire started and remained isolated to one singular Tesla Megapack. For those unaware, a site like this typically has hundreds of massive, industrial battery packs. While it may be increasingly concerning that another Tesla Megapack has caught fire at such a facility, safety systems ensured that the situation didn’t escalate.

Tesla and PG&E have numerous safety systems in place to limit the damage and grid impact associated with a potential fire. Most importantly, the battery storage portion of the site is immediately disconnected from the electrical grid as soon as a fire is detected.

As reported by Teslarati, PG&E provided some information about the multiple safety systems and the measures it takes to ensure that a fire like this doesn’t result in a situation that’s potentially more catastrophic. PG&E shared that the battery packs have their own thermal alarms, which will actually shut the facility down if the temperature reaches a certain level.

There’s also a pedestrian warning system that provides alarms and visuals as soon as an incident is detected. These alarms will help alert workers to evacuate the premises as soon as possible. Other workers responsible for safety and security at the site will be able to take up posts in a command center that’s away from the danger zone. From there, they have access to system power controls and can watch the incident unfold via various cameras.

Thus far, reports confirm that there were no injuries as a result of the Tesla Megapack fire. Moreover, there are no related power outages in the area. However, Highway 1 has been closed while officials deal with the aftermath of the fire.

Tesla began construction on the Elkhorn facility back in July 2020, and it was commissioned and certified in April 2022. There are currently 256 Tesla Megapacks in use at the site, or perhaps 255 following the incident. PG&E has noted that the property damage to the battery itself is expected to cost over $50,000.

See What’s Inside A Tesla 4680 Battery