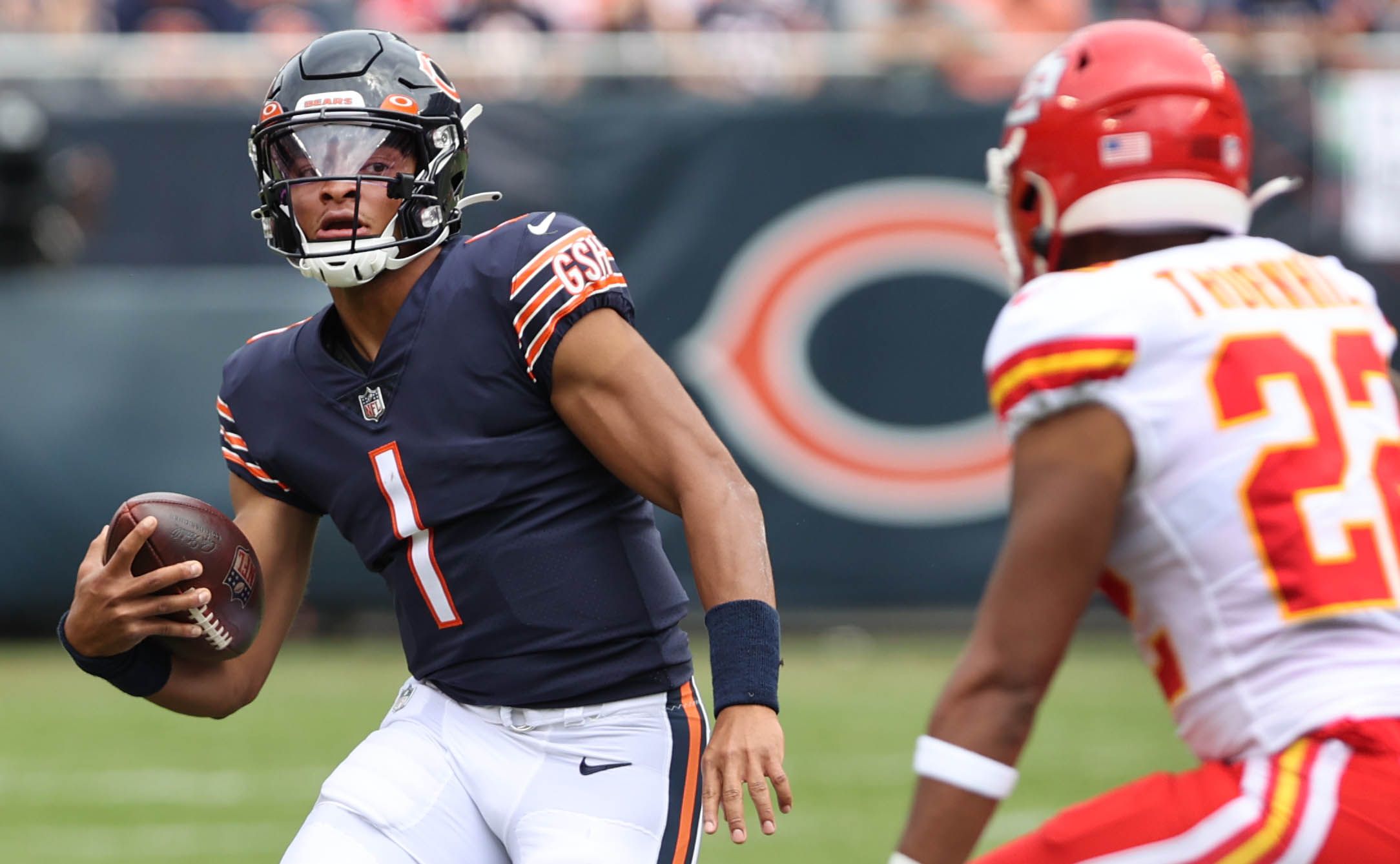 CHICAGO – All in all, Bears quarterback Justin Fields and the first-team offense played 18 snaps of football during Saturday’s preseason game against the Kansas City Chiefs at Soldier Field.

The results for the offense were mixed. Fields picked up four first downs on three possessions, but failed to put any points on the board. The offense was playing without several significant contributors: tight end Cole Kmet, running back David Montgomery and veteran tackle Riley Reiff, as well as receivers in Byron Pringle and Velus Jones Jr.

Fields finished his day 4-for-7 passing for 48 yards with no touchdowns and no interceptions. He also ran for 10 yards on one carry. The Bears were 2-for-5 on third down when Fields was in the game, and both conversions came on highlight-reel catches.

Receiver Darnell Mooney caught a beautiful deep ball from Fields. Mooney made a leaping grab for a 26-yard gain on the play. Later, Tajae Sharpe made a tough catch along the sideline and kept his feet in bounds.

With Montgomery sitting out with an undisclosed injury, running back Khalil Herbert handled most of the carries for the first-team offense. Herbert ran for 20 yards on seven carries.

Meanwhile, the Chiefs first-team offense appeared to be in mid-season form. Quarterback Patrick Mahomes played one possession, and led the offense 72 yards on 11 plays for a touchdown. Mahomes connected with tight end Blake Bell for a 5-yard touchdown. The Chiefs converted twice on third down during the drive.

The Chiefs led 7-0 when the Bears took their starters out of the game, and held a 14-0 lead at halftime.

Roquan update: Linebacker Roquan Smith did not suit up for Saturday’s game, but he did work out on the field prior to kickoff. Nothing has changed with Smith’s status. He continues to sit out practice as he awaits a new contract.

The collective bargaining agreement between the NFL and the NFL Players Association appears to give the Bears the ability to fine Smith a regular season game paycheck – which for him is about $500,000 – for skipping a preseason game.

The CBA states that a player in the fifth-year option of his rookie contract, such as Smith, can be fined for “any unexcused late reporting to or absence from” training camp and preseason games. It does not specify if that applies to a player who is present but who refuses to play.