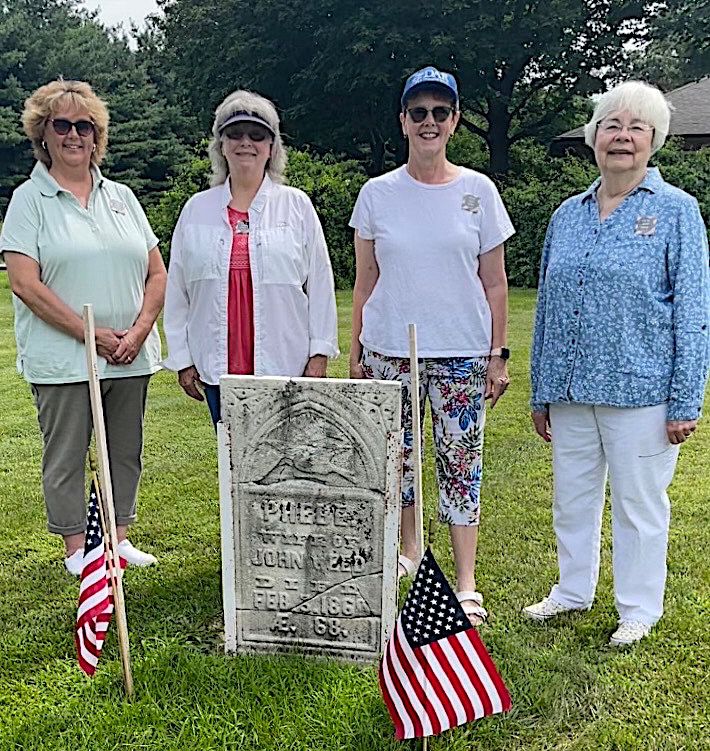 It’s special to find a direct descendant of the Revolutionary War with ties to McHenry County, but Sunday will be a special day.

That is when the Kishwaukee Trail Daughters of the American Revolution Chapter will place a bronze marker next to the worn headstone of Phebe Ashley Mead Weed in a ceremony at 1:30 p.m. in old Marengo City Cemetery at 101-199 N. East St.

“In the life of a chapter, it is rare to be able to celebrate and mark a grave of a daughter of a patriot,” said event spokeswoman Claudia Edwards. “Phebe will be the 43rd marking of a daughter of a patriot in the entire state of Illinois. This is rare because so many have already been marked and because so much of the lineage is lost. Women marry and their maiden names are lost or not traced.”

Phebe is related to Fox River Grove native Kathy (Welisek) Hartke. As a child, she accompanied her mother, Betty, and grandmother Marjorie Long, to the Marengo City Cemetery to place flowers on the graves of relatives. About 2007 or 2008, Hartke became interested in finding out more about her forebearers.

Her great-great-great-great-grandmother Phebe, was the daughter of Phebe Howe and Revolutionary War soldier William Ashley. Details remain sketchy, but she learned he enlisted in July or August 1775. Ashley, born in 1758, was a member of the Vermont militia and one of Ethan Allen’s Green Mountain Boys who fought under the command of Gen. Benedict Arnold. He assisted in the evacuation of Fort Ticonderoga in the face of superior British forces.

Hartke is descended from the daughter of Phebe’s first marriage to Amasa Mead in the Forestville area of New York. Hartke’s great-great-great-grandmother Catherine is one of their six children. Phebe later married John Weed and had three more children.

Phebe is the third person in McHenry County honored by the DAR with a direct connection to the Revolutionary War. The others are Major Watson and his daughter, Clarissa Watson Down, both buried in the Linn-Hebron Cemetery.

In 2015, Hartke and her husband traveled to Poultney, Vermont, to search for records, but she began “actively” working on this project in 2019. Stops included visits to McHenry County Historical Society’s Research Library, with assistance from DAR member and librarian Arlyn Booth.

“We’ve had a lot of help from all the members of the DAR. It is a very exciting project,” Hartke said. “The more you know, the more you want to know.”

After Sunday’s brief ceremony that includes a color guard dressed in Revolutionary War-period uniforms, light refreshments will be served.

The American Veterans Traveling Tribute comes to Harvard from 8 a.m. to 9 p.m. Sept. 8to 11 at Milky Way Park, 300 Lawrence Road. This nationally recognized traveling tribute honors veterans from every major conflict dating to World War I. Harvard is bringing the entire tribute, which consists of of 212 panels and 58,300 names. An 80% scale replica of the Vietnam Veterans Memorial in Washington, D.C., the wall measures almost 400 feet long. It also includes smaller tribute panels honoring American sacrifices in conflicts through the 20th and 21st centuries, including WWI, WWII, 9-11, Afghanistan and Iraq.

“I have a huge military presence in my background,” Harvard Chamber of Commerce member Crystal Musgrove said. Her husband, father-in-law, son, brother, father, stepfather and nephew either served in the military or currently are on duty.

“I’ve wanted to do this for 15 years, to bring something like that here out of respect for those who served from here,” Musgrove said.

The schedule includes school tours, library-led crafts, an appearance by Harvard historical reenactor Ed O’Brien and performances by Joe Cantafio and country singer Austin Edwards. In 2020, Edwards was part of a duo that claimed first runner-up fame on “America’s Got Talent.”

Musgrove is working to line up additional acts, as well as a cadre of volunteers to oversee this free event. She also is seeking sponsors to help underwrite the cost of bringing the etched aluminum panels to McHenry County, as well as light them and keep the memorial secure. If you can help, call the Chamber at 815-943-4404 or email Musgrove at info@harvcc.net.

“It’s very cool and pretty powerful,” she said. “Our freedom is not free. There is a lot of cost in human life.”

Join Ernest J. Varga project/design engineer with the McHenry County Division of Transportation, as he explores the origins of road names across McHenry County. “A Road By Any Other Name” begins at 2 p.m. Saturday, Aug. 20, at the county history museum, 6422 Main St. in Union. Admission, which includes free museum access, is $5 for society members and $8 for nonmembers. For information visit GotHistory.org.

• Kurt Begalka is administrator of the McHenry County Historical Society & Museum. He may be reached at kurt@mchenrycountyhistory.org.