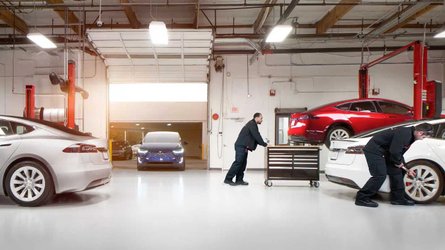 A man in Australia punched a Tesla multiple times, though he says he doesn’t remember any of it. The incident happened after the 44-year-old man, Benjamin John Nannup, had just been in a fight with the brother of his ex at a local fast food joint.

Onlookers reported that they had seen Nannup in some type of physical altercation at Red Rooster in Mandurah. They shared that he was clearly drunk, he was shirtless, and he was yelling and cussing at customers and workers outside the restaurant.

According to reports, Nannup ended up leaving the restaurant. As he was walking away from the area, a red Tesla EV was heading toward him. Witnesses say he then punched the Tesla repeatedly in the passenger-side door, which caused a number of dents. The damages to the Tesla reportedly added up to a whopping $6,634.21. Tesla collision repairs can be pricey. Depending on the availability of parts, the repairs can sometimes take months.

When the police interviewed Nannup, he admitted he had been drinking, but he didn’t remember the event at all. Later, it was learned that the man was homeless and working through a terrible bout with alcoholism. He had also just broken up with his ex.

Nannup had to head to court in his town of Bunbury earlier this week. He pleaded guilty to a charge of criminal battery, disorderly conduct in public, and “breaching a community order.”

The owner of the Tesla will have to pay $1,500 out of pocket, likely due to insurance and the deductible. Court Magistrate Benjamin Tyers ruled that Nannup is responsible for a $500 fine for the disorderly conduct and an additional $100 for the breaching charge. In addition, Nannup received a six-month community-based order, which is essentially mandatory community service. Finally, the man has to pay the victim $1,500 to cover the damage to the Tesla.

This story is just one of many examples of people getting their cars damaged, broken into, or even stolen. If you own a Tesla, be sure to use your built-in Sentry Mode camera-based security system, which could help the authorities if there’s an incident.